Will it end soon, what are the reasons, and why people keep avoiding this term?

After spending some time to consider what should be my first publication, I decided to share my view on the recent turmoil in oil markets. This affects all of us, and like with any economic change - there is losers and gainers.

In my opinion this is  not due to super cycle in the oil price, but a matter of fundamental change in the energy industry. The widening production and use of renewable energy will keep the pressure on oil price, and any bounce back will likely be hammered by speculators.
As we all well know, the de facto cause for sliding price is that the supply significantly exceeds the demand. First thing one will say, is that lowering the supply will bring prices back to more normal levels. However, looks like reducing the production is not on the OPEC agenda, or any other oil producer, and we keep getting signals for this very often (for example, the recent abandoning of production limits for OPEC).
The reason for this is one - market share. Each country believes, that if holds pumping for long enough, other producers will scale down due to low prices, and thus it will keep its market share on the back of the rest. In addition to this, lifting the sanctions on Iran (imposed 1979) will bring up more barrels on the market, and more specifically 500K soon after the lifting, and another 500K until the end of 2016. Just when you would say - that's all - and more things come up. After 40-year-old ban on crude oil exports US Congress decided to lift it. As a result, one more stream of oil is going to flow into the global glut. Because this is not enough, China started a transition from production-based to consumption-based economy, which will naturally reduce the demand (it is more accurate to say "rebalance the demand") for oil and other commodities. All this together makes the perfect storm for oil, and prices will keep sliding, even if there wasn't a fundamental change in energy industry, which only multiplies the effect.
Anyone with basic knowledge in geopolitics is well aware that for long time US and Saudi Arabia were allies supporting each other on all matters. Suddenly the lifting of the oil export ban in US, and the OPEC policy for protecting market share turned these countries in rivals. This will have deep consequences, especially in the Middle East, some of which we are already seeing, but it is whole another story. Some might say that lifting Iran sanctions is also part of this rivalry.
When we put all this together, it's not hard to understand why it's not likely to have sustainable recovery in the oil price. 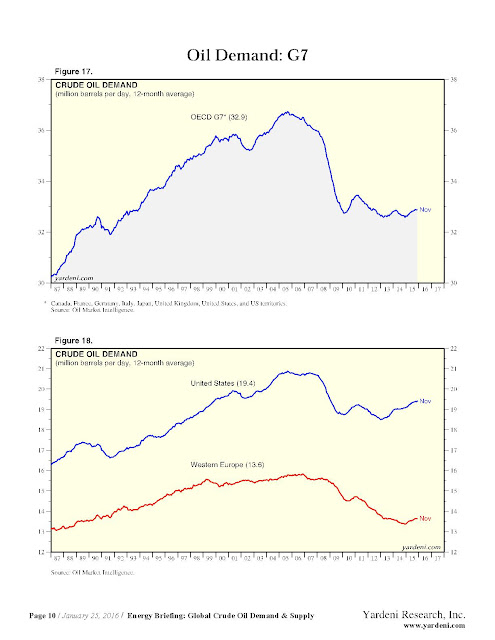 But what about this fundamental change, mentioned in the beginning. Lets start with the oil demand in US and Europe, or the  developed markets.
As we can clearly see, ever since 2005 the oil demand in the developed world is slowly going down. The reason for this is the ongoing transition from fossil fuels to renewable energy. It is important to notice that lower demand is present not just during the last financial crisis, but also before and after - turning this into sustainable trend. It was not long ago when Bloomberg reported that "Wind power is now the cheapest electricity to produce in both Germany and the U.K., even without government subsidies..." The media also reported that  "The price of solar power will continue to fall, until it becomes the cheapest form of power in a rapidly expanding number of national markets. By 2026, utility-scale solar will be competitive for the majority of the world..." And there we go, this fundamental change started slowly but soon it will turn into avalanche. As all things in real life this have good and bad side, but the good one outperforms a hundred times the bad one. Indeed there will be a lot of countries to suffer from this fundamental change, and the rebalancing will take some time. The migration process, that we currently observe, is just a small piece of the picture, and soon the rest of it will start to reveal.
It's very important to say, that solar and wind power are endless, unlike oil, gas etc. This will practically lead to new industrial revolution. But, like most transitions from one age to another, it will be accompanied by severe concussions and shocks. These shocks will be lighter for the developed world, but will hit hard on the so called "petro-states". Some of them will probably manage to emerge, but other will collapse and never raise the same - simply because it will not be possible from geographical point of view (desert regions).
The fact that Saudi Arabia is considering to sell some part of Saudi Aramco, it's oil state company, is just another sign for the fire-selling of everything oil. If I have to put this in more simple manner - the defending of market share represents the wish oil producers to get rid of maximum quantities as possible, no matter if they admit it, or not. Of course this will only bring more glut to the market and keep the pressure on prices.


Why people don't call it "crisis"?

First of all - panic. If we start using the term "World Commodity Crisis", this will spur wide discussion for the causes and consequences, and as result, more and more investors will "realize" (something have to be in the main media streams for the people to believe it's true) that this is not just simple supply issue, but a fundamental change. Anyway, with prices charting new lows, we are getting closer to using this term.
It is important to say, that the initial effects of this transition will be generally negative all over the globe. The reason for this is that a lot of companies were boosting their investments, while prices were high. In addition to this, the fiscal stimulus (QE for example) and the extremely low interest rates, set by Central banks, artificially multiplied these investments without the needed fundamental factors being present. The result of this is big pile of bad loans, which sooner or later will start causing defaults (this is why it is "world crisis", and not just for the emerging markets). All this is just part of the damage done by central bankers, who decided, after the World Financial Crisis (most recent example), that they will fight recession using budget deficits, rates manipulation and fiscal stimulus - all tools of the Keynesians. I will give some special attention to these events/decisions in one of my next publications.
Interesting times are about to come, and for good or bad, we are the generation to make the transition.

How can this information help us for our trading decisions
As I mentioned in the summary of this blog, making informed decisions is extremely important for being successful. So how putting together all the information above can help an amateur make some profits? When it comes to trading it is not possible to offer universal solutions, but just to chart some general trends, thus anyone can benefit in consistency with their personal trading strategy. Here are the main trends I find useful:


Shorting commodity currencies can be a great way to benefit. Most bright examples include Canadian dollar (CAD), Australian dollar (AUD), Russian ruble (RUB), Brazilian real (BRL). My first choice is CAD, since canadian oil producers are extremely vulnerable to low oil prices due to high production costs. For 2016 any close level to 1.40 in USD/CAD looks like a good one to me for shorting CAD. As long as we have oil prices below $40 I believe this is a good trade. As low oil prices keep pressure on canadian economy, the central bank will keep easing it's fiscal policy and lower interest rates, aiming to depreciate the currency and offset losses. AUD is also a good choice, as long as China is slowing with due its transition. Another thing to cause downward pressure will be the collapsing price of coal (Australia is the biggest exporter around the world).

Shares of energy companies will keep sliding along with oil. While some will manage to emerge and adapt to the new reality, most will have hard times. Picking the winners will be more like gambling thus I prefer to stay out of this market, at least until it gets more clear who will survive the transition.

Most likely this will be the sector that will outperform all others. Investments here are still tiny part of the energy industry and the potential is great. At some point, with trillions starting to flow in this sector shares will likely skyrocket. If i had to make investment for the next 10 years this would be my choice. It is important to say that auto-industry will also play important role, with Tesla so far leading the race (good trade too I believe). When another big producer starts to emerge it will be great BUY opportunity in my opinion.


!!!Market speculation carries a high level of risk and can result in the loss of all of your investment!!!

Commodities are powered by Investing.com